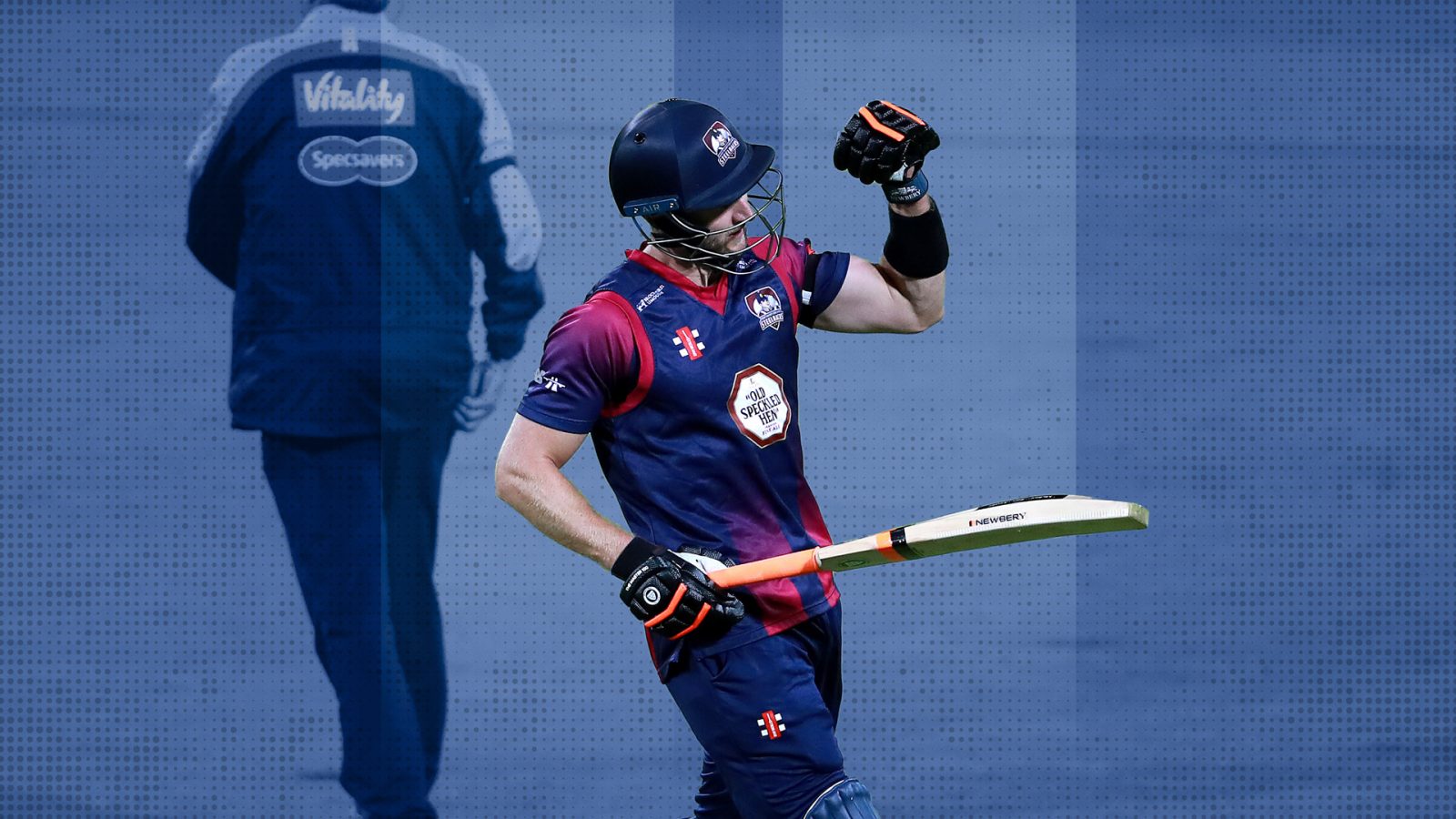 Steelbacks Make it Four from Four

Nathan Buck’s productive season continued as his 4 for 29 led Northamptonshire to a fourth-straight Vitality Blast victory with a four-wicket win over Glamorgan at Edgbaston.

His spell helped hold Glamorgan to 160 for 7, a total that never seemed enough, but Northamptonshire couldn’t find a significant innings to kill the chase and only won with four balls to spare thanks to Alex Wakely’s unbeaten 36 from 29 balls.

Having been cruising, Northamptonshire needed 19 from the final two overs before Graeme White struck Graham Wagg over point and then cover for four. Wakely then powered Marchant de Lange down the ground for four first ball of the final over.

It kept Northamptonshire in pole position for a quarter-final with the best record in the competition while Glamorgan were already staring at another disappointing campaign.

Given the carnage that had ensued in the previous two matches on Edgbaston’s hybrid pitch with a particularly short boundary towards the Priory and Raglan stands – the first innings of both previous matches had yielded 386 runs in 34 overs – Buck’s figures from his four overs were miraculous.

But he has made noticeable improvements in this shortened summer and, after a double-wicket maiden helped his side to victory on Monday, again was effective with a number of deceptive changeups and an excellent yorker.

Glamorgan were actually well placed at 95 for 1 in the 12th over before Buck returned for his second over. He had Nick Selman caught at deep square before taking out the visitors chief threat, Andrew Balbernie, with a pinpoint quick yorker.

Balbernie made 58 in 38 balls – passing the ninth T20 half-century of his career in 33 deliveries – but his wicket left Glamorgan short of firepower in the closing overs.

Buck also had Owen Morgan caught at short-third man and Graham Wagg taken by the third, and most spectacular, of Saif Zaib’s catches.

Zaib took Wagg with one hand on the edge of the long-on boundary, threw the ball up as he tumbled over the rope and calmly stepped back into play to complete the catch.

His second catch – to remove Callum Taylor off Graeme White for 2 – was also impressive as he ran and dived to his left from deep midwicket.

Glamorgan failed to take advantage of the short boundary and struck only five sixes. Selman’s 35 off 32 balls was pedestrian given the circumstances. Dan Douthwaite, who slugged two fours and two sixes in making 23 from 13 deliveries, was the only other batsman to put Northamptonshire under pressure.

By contrast, Northamptonshire struck four sixes within 21 balls of the reply. But neither Richard Levi – who pulled de Lange to deep midwicket for 28 – nor Paul Stirling – caught at deep square two balls later for 22 – could kill the chase. And when Josh Cobb fell lbw pulling at Prem Sisodiya for only 14, none of Northamptonshire’s power hitters had done too much damage.

Wakely and Ricardo Vasconcelos, with 25 in 23 balls, steered the chase calmly and 37 were needed from 30 balls. But Callum Taylor struck first ball of his spell to remove Vasconcelos and then took Zaib caught and bowled to build the pressure only for White and Wakely to finish the job.

Victory for Northamptonshire was a fitting tribute to David Capel, their former allrounder and head coach who died on Wednesday aged 57. The players wore black armbands in his memory having paused for a minute’s silence before play.