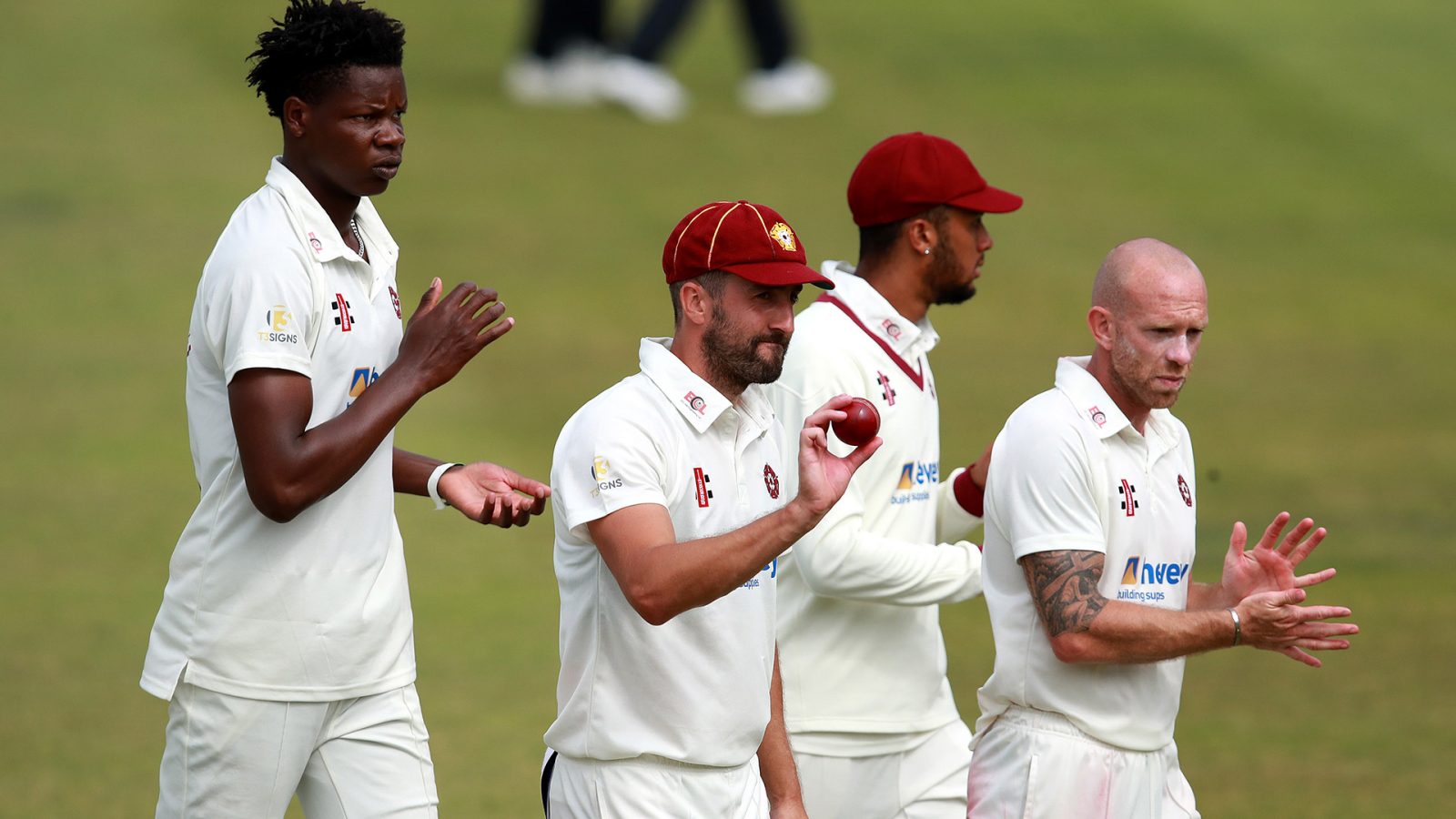 120 overs was deemed a sensible first-innings limit to protect bowlers during the Bob Willis Trophy. But Somerset needed no additional conditions to give their players a break after sending down only 75 to beat Northamptonshire by 167 runs at Wantage Road.

A kamikaze match was completed on the second evening with Northamptonshire losing 6 for 6 in 24 balls to be hustled out for 154. An improvement on 67 all out in the first innings, and development is indeed the aim for Northamptonshire in this truncated season.

Victory is the only currency for Somerset after so many near-misses in the County Championship in recent seasons and they again showed their ruthless streak with the ball, probing away enough to find the home batsmen wanting in their ability to consistently leave the ball outside off stump.

Jamie Overton claimed 4 for 26, completing a jolly fine day after slugging 68 from 43 balls either side of lunch – the highest score of the match – to ensure Somerset once again claimed momentum at the change of innings. It was most necessary too after his side were 53 for 6 trying to build on a first-innings lead of 99.

A target of 322 seemed a world away for Northamptonshire and although they enjoyed a better session to tea – reaching 104 for 3 with Ricardo Vasconcelos making an attractive 52 – a run of wickets never seemed far away. Losing Vasconcelos four balls into the evening session ended any realistic hope.

The end was brutal. Charlie Thurston gloved Jamie Overton down the leg side trying to pull. Adam Rossington also tried to pull him, missed and was given leg before – although replays indicated height and line should have been considerations for Rob Bailey.

Jack Brooks found Gareth Berg’s outside edge and he was held at first slip for a fourth ball duck and next ball a full delivery trapped Ben Sanderson lbw and this time there was absolutely no debate. Blessing Muzarabani’s stroke to survive the hat-trick was effective if not typically advised.

Brooks ended the match with a fourth wicket and completed a fine game having struck a momentum-shifting 36 from No. 11 on the first afternoon and later ran out Vasconcelos.

The denouement was fitting for a game played a breakneck speed. After 21 wickets on the first day Somerset simply decided to strap in for the ride on the second morning. But instead of merely bracing themselves for the bumps down the mountain, they floored the accelerator and whacked 160 in 25 overs to lunch.

The aggressive tactic was a response to their precarious position – leading by only 152 with four wickets in hand. The lower order broke free and Craig Overton and Roelof van der Merwe swung successfully to add 67 in 51 deliveries.

Overton struck three sixes – hoisting Berg over long-on then flicking him beyond square leg and playing the same shot against Sanderson. His brother Jamie then saw the bet and raised him by one with a pair of pulls, a vicious smear over long-off and a hoik that just cleared deep midwicket as 48 runs came in 37 balls after lunch to push Somerset out of sight.

Northamptonshire also decided that positivity was required to have a sniff of the target and Vasconcelos struck six fours in 10 balls to reach his half century. But in the over after tea, he poked at a ball from Josh Davey some two feet outside off stump and was taken at second slip.

The same dismissal – albeit from a much tighter line that demanded a stroke – removed Ben Curran. Emilio Gay fell in very similar fashion, held at first slip feeling for one from Jamie Overton that could definitely have been left alone.

Rob Keogh tamely lobbed a return catch to Brooks trying to work a full outswinger to leg and the final six wickets fell in the time it takes to drive from Minehead to Watchet.