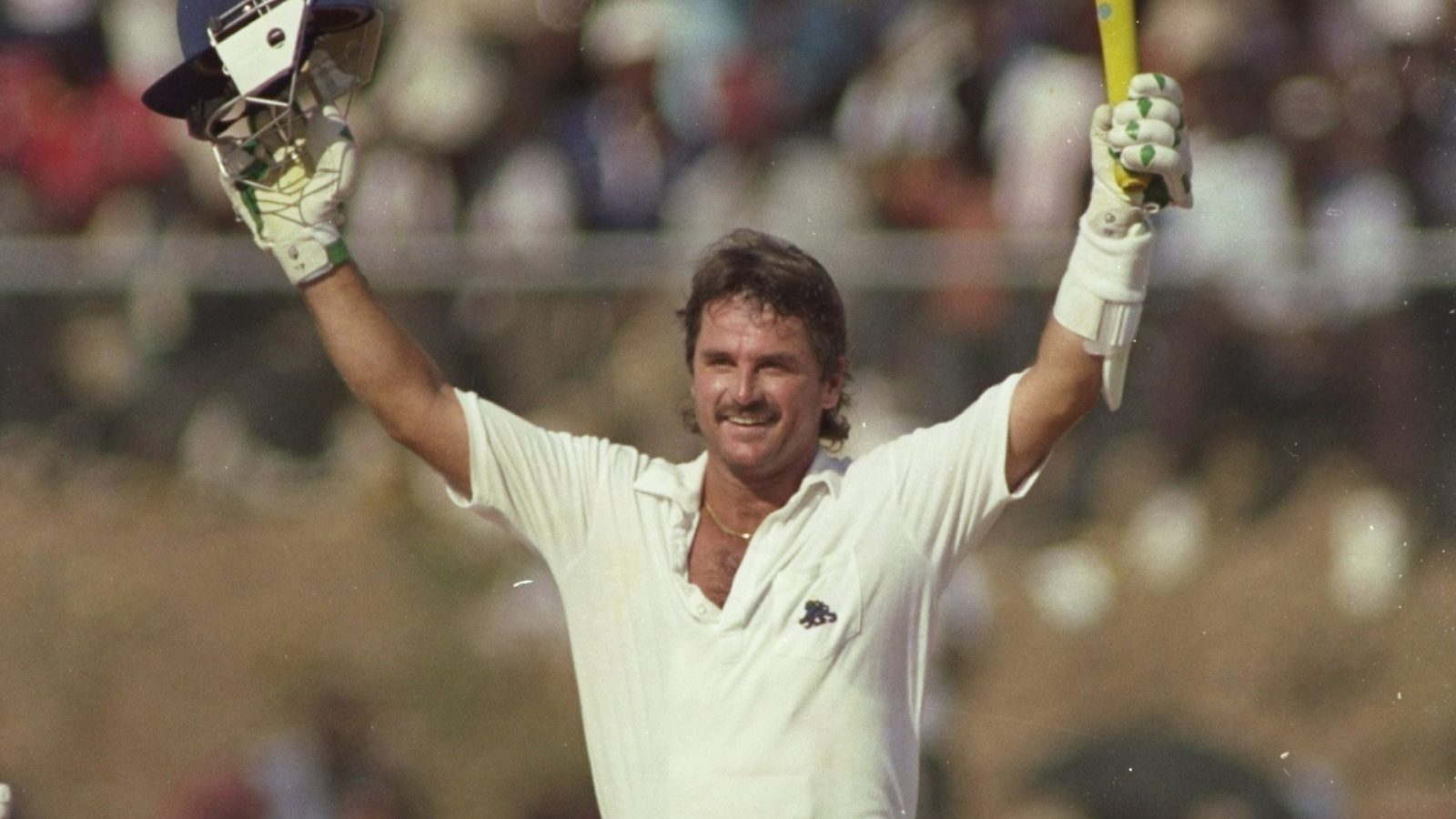 Allan Lamb has admitted he felt ‘hugely honoured and privileged’ to be chosen by supporters recently as Northamptonshire’s greatest player of all time.

Lamb – one of the original inductees into the club’s Hall of Fame two years ago – topped a poll on the County Championship’s official Twitter account, ahead of fellow contenders Dennis Brookes, Sir Curtly Ambrose and David Sales.

“I was a bit shocked to be honest,” says the County’s former captain, who spent 18 seasons at Wantage Road between 1978 and 1995 – scoring over 30,000 runs in 600 appearances in first-class and limited-overs cricket for the club, not forgetting 79 Test and 122 ODI outings for England.

“There have been so many great cricketers to represent Northamptonshire over the years, and I’m so lucky to have played alongside many of them.

“When I first started at the club in 1978 we had David Steele, Peter Willey, Wayne Larkins and Geoff Cook.  They were the stalwarts of the side – and they all played for England.

“On his day, Wayne was one of the best batsmen I’ve ever seen.  I’ve seen him murder an attack when he was in the right mood – just an incredible player.  I don’t think I’ve ever seen anyone hit a ball more cleanly than ‘Ned.’

“Geoff played most of his career here and I took over from him as captain.  He was a gutsy, hard-working player who batted for his life for Northamptonshire – and he stands out massively in the club’s history.  Peter was a courageous guy, never fazed about talking anyone on.  He played the quick bowlers so well.

“My first captain was Jim Watts, who came back in ’78 to help the club out.  Tactically he was so good and led us to the Benson and Hedges Cup (in 1980).”

He was also ‘really delighted’ to see all-rounder David Capel join him in the Hall of Fame a few weeks ago.

“Capes thoroughly deserved that.  It’s all about service to the club and what you put back, and no-one has given more to Northamptonshire over a long period of time than him.

“In the team with him we also had Rob Bailey, another wonderful player and one of the ‘workhorses’ if you like.  He was a very talented batsman and I reckon if he had backed himself a bit more he would have scored even more runs.  He has a very good record but it could have been even better.”

Runner-up to Lamb in the recent poll was the towering Antiguan fast bowler, knighted by his native island’s government in 2014.

“To me, Curtly was one of the greatest of all time.  He certainly won us a lot of games during his time with Northamptonshire,” not least during the successful NatWest Trophy run in 1992.

“It could be difficult captaining him.  You’d ask if he wanted to bowl from a particular end and he’d say ‘no.’  So you’d ask what the problem was – and he’d say ‘Captain!  Don’t ask me – because I don’t like bowling.  Just tell me, and then I’ll bowl!”

“We got him from the leagues (Ambrose signed for Northamptonshire whilst playing for Heywood in the Central Lancashire League in 1987, before making his international debut for West Indies) and he was just an incredible bowler.”

Australian legend Dennis Lillee undoubtedly belongs in the same category – and although he spent just one season at Wantage Road, in 1988, Lamb insists his impact then was considerable.

“I remember at one stage we had Greg Thomas bowling at one end and Dennis Lillee at the other.  Not a bad combination!

“Dennis was injured fairly early on and could have gone home, but he stayed on with us to do some coaching.  A terrific guy and still a close friend.”

Lamb’s seven-year stint as captain saw any number of outstanding young cricketers come to the fore – not least Mal Loye and David Sales.  The former was given his first proper ‘run’ in the side in 1993, while the latter made his first-team debut, aged 16, in a Sunday League match at Chelmsford the following season, marking the occasion with an unbeaten 70.

And supporters with memories of the period still recall fondly the extraordinary events of Lamb’s ‘farewell’ summer in 1995 – when a surprising overseas recruit wrote his name into the club’s record books.

“Anil Kumble nearly won us the County Championship in ‘95.  I wanted him to replace Curtly who was away with the West Indies that summer.  The committee weren’t too happy about bringing in a spinner for a quick bowler, but I felt that was what we needed.

“Talking to Sunny Gavaskar and Mohammad Azharuddin – they said he’ll get plenty of wickets, but make sure you’ve got a good short leg fielder because everyone plays for the leg-break and you’ll get a lot of people caught there.  And that’s exactly what we did.”

Sure enough – Kumble claimed 105 Championship wickets, 17 of them caught by Richard Montgomerie close in.

“It was amazing.  No-one has taken 100 wickets for us since then, and the one to do it before Anil was Bishan Bedi – so we were lucky to have two great Indian spinners play for us.

“That was a very special season.  We went flat out to win the Championship and I told the guys to try and forget about draws.  Better to lose a game in trying to win it.  We took a gamble at times but it kept us in contention nearly to the end.”

Lamb’s men won 12 Championship matches – enough to win the title in many seasons, but only good enough for third place that year.

He remains a proud county resident and a close follower of the club’s fortunes – and although he never saw him play, he reserves a special mention for another member of the ‘best-ever’ poll shortlist.

“Dennis Brookes probably watched most of my Championship innings for Northamptonshire at the County Ground.  He wasn’t as keen on the one-day stuff!

“He was a very shy man – but if ever I was having a bit of a problem he would just come up to me and say ‘you’re falling over a bit’ or ‘your head isn’t right.’

“A remarkable man – very quiet and kept himself to himself, but he knew the game of cricket inside out.  Another  Northamptonshire great whose record (more first-class appearances, runs and centuries for the club than anyone else) speaks for itself.

“I just loved playing for the county – I loved the people, I loved the crowds and I loved the players I played with.  There was never a dull moment – let’s put it that way!”