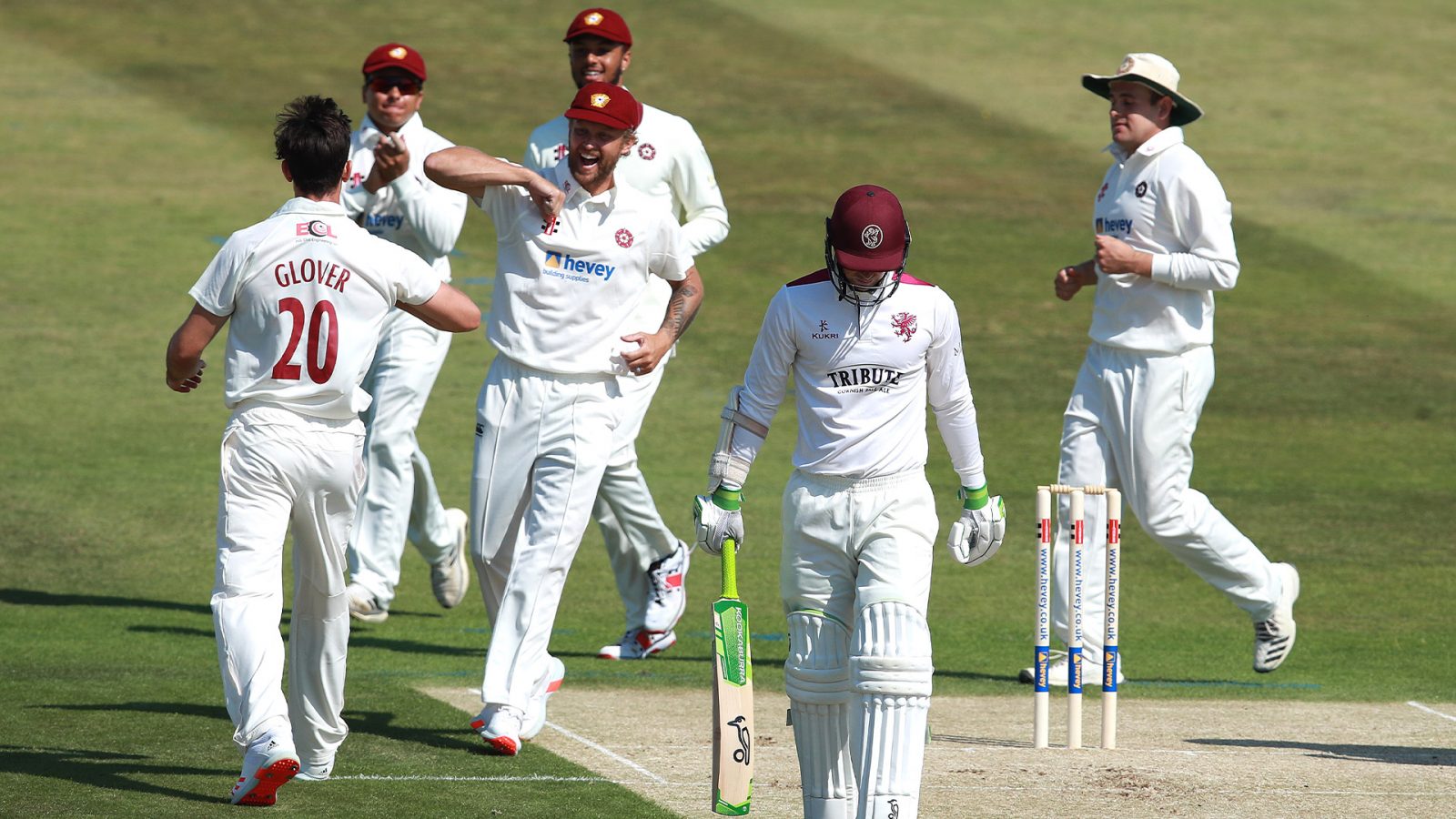 Having won the toss on a searingly hot day, Somerset were 114 for 9, then rallied to 166 before Northants, steady at 46 for 1, collapsed to only 67. The visitors then closed then 15 for 1 in their second innings with Tom Lammonby out twice in the day.

With few runs on the board, their response to Ben Curran’s six early boundaries was emphatic. It was led by Craig Overton, whose 11 overs claimed 4 for 12 with six maidens. Northants middle order simply could not score against any of the four-man attack nor resist a series of excellent deliveries.

Emilio Gay failed to leave Craig Overton in time and edged behind before Jack Brooks’ direct hit from midwicket ran out Ricardo Vasconcelos and Curran felt at one from Josh Davey that held it’s line and was taken at third slip.

Davey then sent one jagging back at Rob Keogh who was lbw offering no stroke and Brooks’ movement away from the righter hander pinned Charlie Thurston on the boot.

There was no let up. Bounce from first Craig then Jamie Overton had Adam Rossington and Gareth Berg caught behind the wicket and a Davey inswinger beat Procter’s inside edge to win another lbw. Davey finished with 3 for 23.

Until then, they day had begun to provide an answer to a burning question about Ben Sanderson. Only two bowlers have taken more County Championship wickets than Sanderson since 2016 but the men ahead of him have claimed the majority of theirs in Division One, leaving one wondering how Sanderson might fare against seemingly superior batsmen. He provided an early indication as he took 5 for 28.

Somerset might not present the most solid order in the country – only two sides in Division One earned fewer batting points last season and Glamorgan had them 149 for 8 in the first innings last week – but this is still a line up that almost won the Championship. Therefore Sanderson’s 13th first-class five-wicket haul takes on greater significance.

He began with a nip-backer that took Lammonby’s off stump as he shouldered arms and removed another left-hander in the over before lunch as Steve Davies drove loosely to be bowled.

After the break, he called Rossington to stand up for James Hildreth. The plan worked within two balls as Hildreth feathered a length delivery. Craig Overton, having struck three boundaries, then nicked one that held its line to fourth slip and Jamie Overton looped a full ball to mid-off from a leading edge as he looked to work to leg.

Sanderson had fresh new ball partner in Brandon Glover. There are few for whom lockdown was a blessing but Glover is perhaps one of them. The enforced delay to his Northants debut allowed him extended recovery time from the ankle injury with which he arrived in the UK. Fully fit and with hunger to impress no doubt having grown, he enjoyed an excellent first outing for his new team, taking 2 for 49.

It took Glover nine balls to strike but he had Eddie Byrom to thank for his maiden Northants wicket as the left-hander slashed at a wide length ball, feet cemented in his pre-delivery stance, and edged to Rossington. He second, nine balls later, was not exactly by design either as Tom Abell was strangled down the leg side.

They were about to be embarrassed at 114 for 9 before Brooks, back at the club who made his career, three times carved boundaries over the slips in a merry 36. And by day’s end it was cheers all round for the West Countrymen with a commanding position.