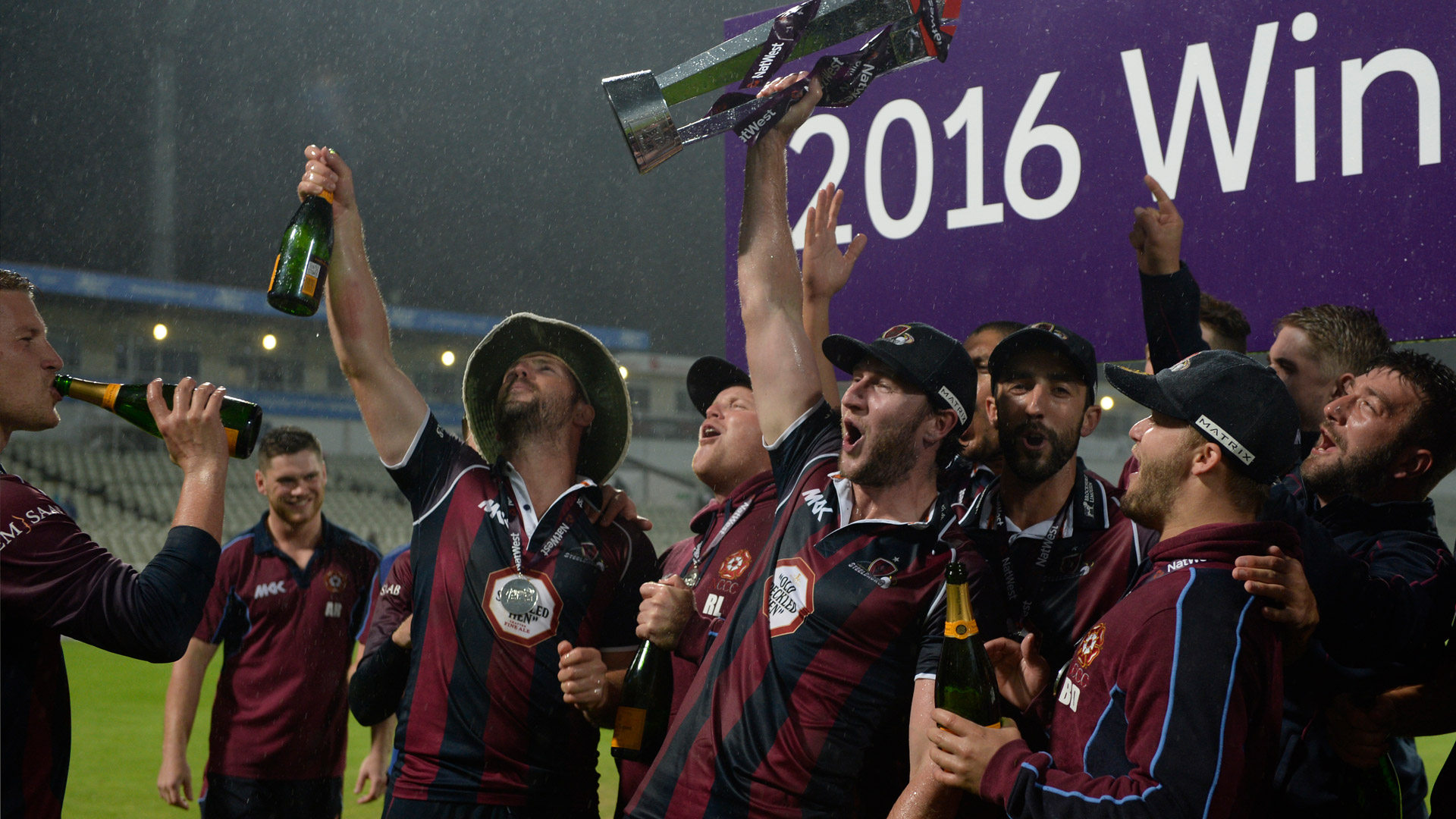 A Toast to Alex Wakely

The phrase ‘nice guys finish last’ is often attributed to Leo Durocher, described by the New York Times as ‘perhaps major league baseball’s best example of the win-at-all-costs manager, one who viewed the game not as a challenging pastime for talented athletes but as a sports relative of guerrilla warfare.’

Durocher passed away some years ago – before Northamptonshire, under the leadership of David Ripley and Alex Wakely, proved him emphatically wrong by winning the domestic Twenty20 title in both 2013 and 2016.  Neither man is a sporting milksop in the ‘after-you-Claude-no-after-you-Cecil’ mould, but both have been more concerned about achieving maximum success with limited resources than with roaring, screaming in-yer-facery.

Northamptonshire’s trophy-winning captains are an interesting and varied bunch.

Mushtaq Mohammad of the steely wrists and baffling leg-breaks and googlies, opening our account by lifting the Gillette Cup in 1976.  Shrewd-as-you-like Jim Watts, bringing two decades of experience and know-how to bear on the task of winning the ‘B&H’ in 1980.  Allan Lamb damning the torpedoes and deleting ‘defeat’ from his personal lexicon as the County swept aside the old enemy in the 1992 NatWest Trophy decider.

Alex has been part of the furniture at Wantage Road man and boy.  In 2003, he made his mark with a couple of outstanding knocks at Finedon, playing as a 14-year old for Northamptonshire’s Under-19s against Warwickshire.  He joined the Academy the following year, and the county yearbook reported that he also ‘bowls at a distinctly lively medium pace’ – but then again the author of that curious assessment never was much cop.

In 2005 he carried off the Dorothy Radd Shield as the county’s leading cricketer in national age-group competitions, shining for the Under-17s squad coached by…yes, David Ripley.  The embryonic partnership was already doing the right thing for Northamptonshire cricket.

He has retained that refreshing honesty to the benefit of not just we quote-hungry hacks but the game in general.  In that particular tournament, England bowed out in the quarter-finals to India, captained by a chap named Virat Kohli.  Wonder what happened to him…

Those of us who relish a ‘sign’ to confirm our pet theories about this or that player were delighted (and probably a tad smug as well) when Alex hit a Championship century – his second – against Middlesex at Lord’s in 2010.  It seemed the perfect setting for him to show off his ability.  That it took him a few more seasons to add to that tally of three-figure scores underlines the fact that performing consistently, day-in, day-out, in professional cricket is not easy.  If it were then all of us would have notched 12,000 runs for Northamptonshire in all competitions, instead of just an elite group of very talented individuals – like Alex Wakely.

Much has been said and written about those two T20 triumphs.  It’s worth repeating here that his own personal contribution with the bat was a major factor; an unbeaten 59 off just 30 balls to help set up victory over Surrey in the 2013 final, and then 43 from 39 deliveries after coming to the crease at 9-3 chasing 154 to beat Durham three years later.  His 120-run stand with Josh Cobb made it possible before Rob Keogh finished the job.

In between, he suffered that Achilles tendon injury on the squad’s pre-season tour to Barbados that sidelined him for the entire 2014 season, and threatened to end his career.  It took plenty of hard yards, old-fashioned slog and grim determination to come back from that – qualities also required to maintain his and the team’s focus during the club’s well-publicised financial travails during the 2015 season.

When he stepped down as captain in both formats in June 2019 I quoted the Burt Bacharach/Hal David song from their musical ‘Promises, Promises’ – the one that says ‘knowing when to leave may be the smartest thing anyone can learn.’  It wasn’t the ending to his spell in charge that anyone wanted, but he recognised the moment and went with dignity and a genuine commitment to help his successors (because his departure prompted a return to the ‘split’ captaincy) by scoring as many runs as he could.  It reminded those of us with longish memories of the small-scale press conference – four people in total, if I remember rightly – at the end of 1988 to announce the resignation of another top man, Geoff Cook.

‘Wakers’ has promised not to be a stranger at the County Ground, and he knows he will always be welcome.  As one fascinated – or obsessed, if you prefer – with the history of Northamptonshire CCC, I’m as confident as I can be that for all the reasons stated above he will occupy a place of honour in our club’s pantheon of people who are remembered with respect and affection, both for what they did and, equally important, the way they did it.

Honest chap – and keen golfer – that he is, Alex will probably feel he ‘left the odd shot out on the course’ during his cricket career.  But cricket is not, never was and hopefully never will be just a matter of statistics.  Even the factoid about those two major trophies overlooks the REALLY significant things; devotion to his family, and any number of personal kindnesses that many of us have reason to thank him for.

See you around, Al.  Watch out for low beams.  And well done for debunking the dodgy wisdom of ‘Leo the Lip.’